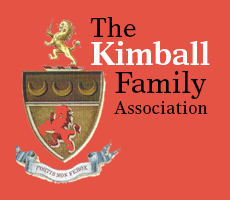 If you have any information on any of these family members, please contact [email protected] com

We have never found Rufus Osmore or Rufus Porter (both supposedly born in VT.) The Isaak and Ruth are more familiar; we found them first in northern Grafton Co., NH and later in VT. Other than their names we know nothing about them. Isaac and Ruth are listed in the IGIas parents of a Rufus b. 27 Aug 1800 in Danville Twp., Caledonia Co., VT.

Born/resided in Concord, NH between 1770 and early 1800. His wife was Elizabeth (____); she died in 1864, St. Catherines, Ontario, Canada. Her obituary states she was the “widow of the late Ezekiah Kimball of Concord, New Hampshire.”

Ezekiah and Elizabeth had at least four children, two of which were born in the U.S. Several generations lived in the St. Catherines area before migrating back to the U.S. The last Canadian born was James Reid KIMBALL, born 1865.

The correspondent is “desperate to find a link for my Canadian Kimballs back to the United States.” Can anyone help him?

His name may have been spelled ‘Abraham.’ Abram/Abraham evidently served in the Civil War and died between 1861 and 1866. Information is also available on succeeding generations, if needed.

It is not unusual to find a Kimball marrying another Kimball. This is what happened between Charles Brooks Kimball (#1502), born in Groton, NH, 20 Jan 1809, the son of Jonathan6 and his 2nd wife, Dorcas Brooks, and Mary Jane Kimball (Polly), the daughter of Samuel8 and his wife Betsey Hartford, who was born in Wilmot, NH, 12 Jul 1818. These two families migrated from New Hampshire to Elgin , ILL , and were ‘pioneers’ of that community. KFA was given some years ago, a typed transcript from the pages of a journal “Polly” kept in her adult years. In it she says:

“I was born in the town of Wilmot , Merimac County , New Hampshire on July 12th, 1818. At the foot of Lecirsarge [Kearsarge] Mountain, one of a family of 16 children, eleven boys and five girls. I lived there until I was fifteen when my parents moved to Groton, Groton County [should be Grafton County ]. Married October 5th 1835 to Charles B. Kimball. Started for Illinois on October 8th. Went by land to Troy , New Jersey [ New York ?]. Went by canal to Buffalo , took steamboat to Detroit. Hired a team to take us to Chicago. Arrived on November 3rd, 1835. Went to Flag Creek to a brother of my husband who kept a hotel. Stayed there two or three days. Went to Elgin. It had no name then, only two houses. We lived in a log house covered with shakes, a puncheon floor, a big flagstone fireplace toped out with sticks. There I spent the first winter of my married life, happy days. We had no snow that winter. Sleigh rides not thought of. If a flurry of snow fell it went off the next day. We wiled away the winter in dreaming of the future and eating bread and beef.

“In 1837, Gifford’s built a grist mill upon the east side of the river. The place soon began to build up slowly. The first year letters cost 25 c. In ’37 Frank and Walter ran a stage from Chicago to Gulena [ Galena ] through Elgin. It seemed very nice to see the stage come and go out. Business began, two hotels, one store. Blacksmith shop in 1837.

“We lived in Elgin until 1854. Our children were born there. Six children. Three lie asleep in the Elgin cemetery – Warren, Henry and Amanda.

“Feeling some better. Been sick all winter. Nobody knows what a winter its been for me. No one will ever know how I have suffered.” (This came to KFA from Loren Kimball of Saskatchewan , Canada; great-great-grandson of Polly and Charles Brooks Kimball. Of the three children who survived, all married and had children. We have descendants from Charlie. Loren Kimball’s great-great-grandfather was Albert. In the 1890 census, Polly is living with Eva and her husband, R. N. Vail. Warren died in Elgin in 1845, as did Henry. Amanda died in 1848, aged 5. All three are listed in the Elgin, Illinois cemetery records.)

My group of Kimballs are looking for information on our great-grandfather, Marion Kimball from Maine (Bangor or Carmel). He and my great-grandmother, Florence Steeves (Prince Edward Island or Nova Scotia), had a child named William Leonard Kimball around 1916. William married Marion Korapatkin, and because of this, there is a whole boat-load of Kimballs in CT, MA, FL, and Hawaii. I believe the relationship (marriage) between William and Florence was not long lived and Marion returned to Maine and married his high school sweetheart, Lena Hutchins in 1920 fathering more children with her. We believe one of those children was named Marion Leonard Kimball, Jr. Marion also had a sister named Margaret, with whom we had brief contact in the 1970s. She (Margaret) indicated that Marion Sr. died in 1965. Sadly, that is all we have to go on in our quest to link up with the larger Kimball family tree and complete our story. Any and all information you can provide would be much appreciated. Thanks! Ray.

My ggg-grandmother, Hannah Robb, married Isaac Brainard Kimball in the early 1830s in Monroe, Michigan. They had several children (who also had the middle name “Brainard”) and then Mr. Kimball died between 1847 and 1849. Hannah then married my ggg-grandfather, Nathan Dodge. We don’t have any past (older?) information about Hannah or Nathan, save finding them in an 1850 census in Monroe County, Michigan, and we’d like to. Over ten years of Hannah’s life was spent as a Kimball and that’s important! I wonder if you have any information about these names (Kimball and Robb – maybe Brainard was a family surname?

Can you help me or point me towards someone or some source who can? I would appreciate it very much.